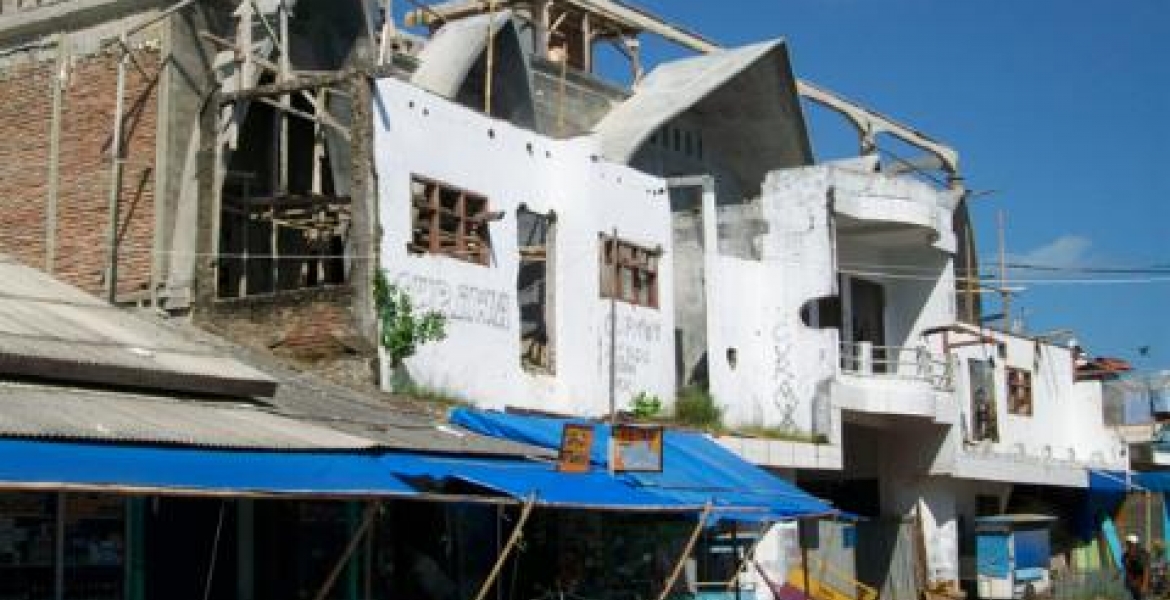 Disaster Preparedness against Tsunami Risk in Pangandaran, Indonesia: Between the 2006 Tsunami and IOWave16

In the span of four years until 2010, villages in the affected areas of the 2006 Pangandaran Tsunami received various rehabilitation and reconstruction assistance managed by the central government, donors and international / local non-government organizations, such as the Java Recovery Fund’s REKOMPAK program (Bisri, 2010). However, from there the local government received little support in building preparedness against future disasters. In addition, political and administration change occurred in 2014 whereas villages and districts in the affected areas are no longer belong to Ciamis Regency, as in 2006, but became part of Pangandaran Regency.

Accordingly, this article focuses on tracing some disaster preparedness elements in the area between post-2006 tsunami until the implementation of the IOWave16 Indian Ocean Wave Tsunami Exercise. Some elements indicate decreasing level of disaster preparedness, while others show some well-maintained elements of preparedness. At the end of the article, untapped potentials in Pangandaran are identified that may increase disaster preparedness against future tsunamis, as well as local’s reflections and potential action points. This article is built upon documentations of past research (Bisri, 2010) and followed by transect process in the area for taking pictures of the same spot in 2010, 3.5 years after the tsunami, and in 2016 or ten years after the tsunami and in-depth discussion at BPBD Pangandaran office one week after the IOWave16 tsunami exercise in Pangandaran.

From the field observation and transect to review the implementation of IOWave16, it was found that some programs, activities, facilities and equipment that were initially installed for enhancing the disaster preparedness in the area did no longer exist. For example, in all six elementary schools in Pangandaran Village, none of them has received any disaster education or school disaster preparedness program. Less concern on disaster preparedness was also admitted by both local government and people, as shown in their perception towards IOWave16. In one interview, a local fisherman said that “…yes we were aware of the tsunami drill last week (IOWave16). But we were not invited to participate in the drill, even if we are, it is better to use the time for catching (the) fish…” (local fisherman, male, interviewed in 17 September 2016).

The tenth years’ commemoration of the 2006 Pangandaran Tsunami was also minimum in terms of media coverage, science-policy related activities and impact to larger disaster management discourse, in comparison to other disasters commemoration such as the 2004 Aceh Tsunami and the 2006 Central Java Earthquake. Local government and community did organize a commemorative event consisting of a long-march from the tsunami affected areas to the Pangandaran Grand Mosque, jointly cleaning the beach, conducting evacuation drills in some schools and organizing praying sessions for the tsunami victim. Yet, local officials admitted that the emphasis was more on a commemoration of past disaster, rather than using the momentum of the commemoration for disaster management policy debate or for building the overall disaster preparedness of the community.

The fading memory of the 2006 Pangandaran Tsunami was also clear from a physical infrastructure point of view. Some tsunami evacuation signs which have been installed in the past were gone in 2016; albeit some of them indeed do not conform to the current standard from BNPB (National Disaster Management Agency), but there was no replacement installed. In 2009 – 2010, there were five big billboards for enhancing the disaster awareness of the general public, particularly on actions at the time of an earthquake and it listed important telephone numbers during a disaster; at the moment none of the billboards are in place anymore. 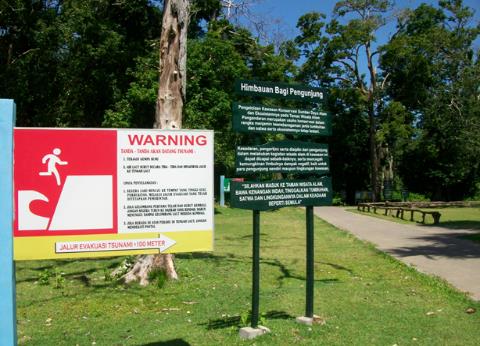 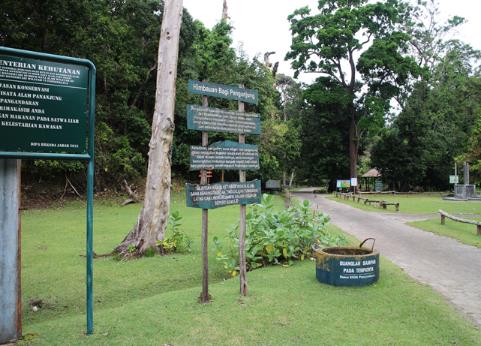 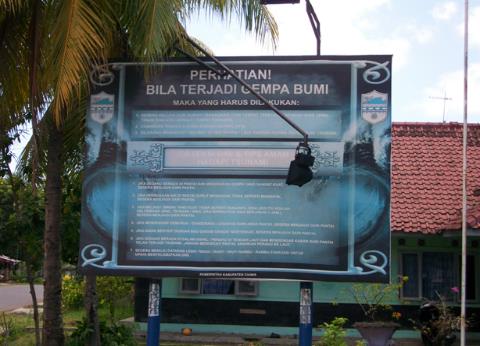 Tsunami Disaster Preparedness Elements in Pangandaran: Is it improving?

Good news has also been identified on tsunami preparedness elements in Pangandaran city, as well as potential elements that can be leveraged further. One of the most identifiable element is the good maintenance of infrastructure built during REKOMPAK implementation, such as evacuation roads and alleys that six years ago were built with active participation of local people, as well as the tsunami evacuation signage. A new main road was also opened in the north-side of natural conservation area of Pangandaran (Cagar Alam) that provides new access between the east-coast and west-coast of Pangandaran; i.e., this was also proposed in the aftermath of the 2006 tsunami. Another element that will add to tsunami disaster preparedness in Pangandaran comes from the construction of a temporary evacuation building (Tempat Evakuasi Sementara-TES), that is scheduled to be completed by the end of 2016. The BPBD Pangandaran regency has a vision to start using the TES, which is located behind the Pangandaran Tourist Market (Pasar Wisata), for their regular tsunami drill. In addition, there are also discussions to use some space in the TES for daily use by some divisions of the BPBD Pangandaran regency, although the emergency operation center (Pusdalops) will remain the safe location away from the shoreline and tsunami risk area. 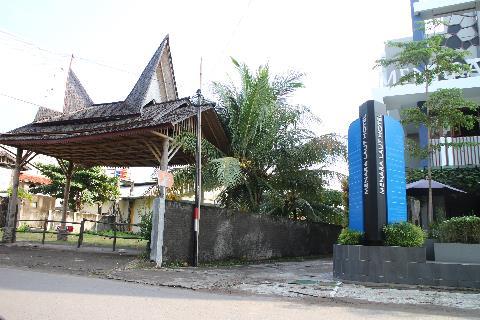 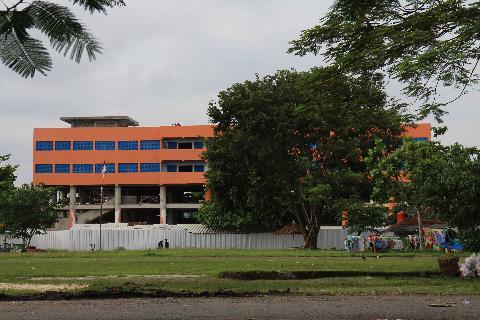 Tsunami Evacuation Building is under construction in Pangandaran (Photo by Bisri, 2016)

One important observation that requires follow up for improving tsunami preparedness of Pangandaran lies with its potential as tourism destination. From post IOWave16 observation, there are at least ten newly built and renovated major hotels with high-rise building. From a quick glance, the tsunami evacuation building looks promising, based on its geographical location. The average height of the building reaches four to five floors, which might shelter at least three-hundreds of evacuees in each hotel.

However, based on discussion with the local official, it has become clear that so far minimal communication has been established with companies in tailoring their investment to overall tsunami preparedness of the region. Although from the first author's interview back in 2010, one of the hotel owners at that time declared that their new four-story hotel is earthquake-proof and public can use it as an evacuation building in the case of next earthquake and tsunami. Therefore, a coordinated and concrete program is needed to develop the preparedness and resilience of Pangandaran. 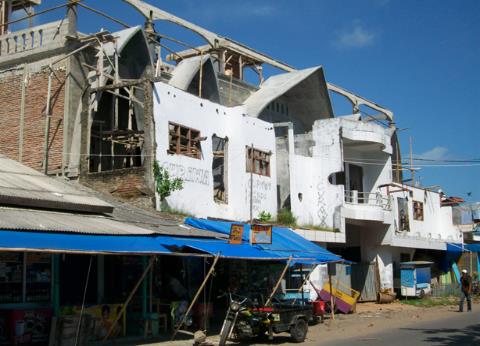 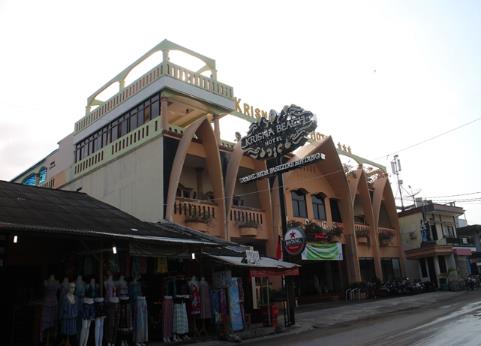 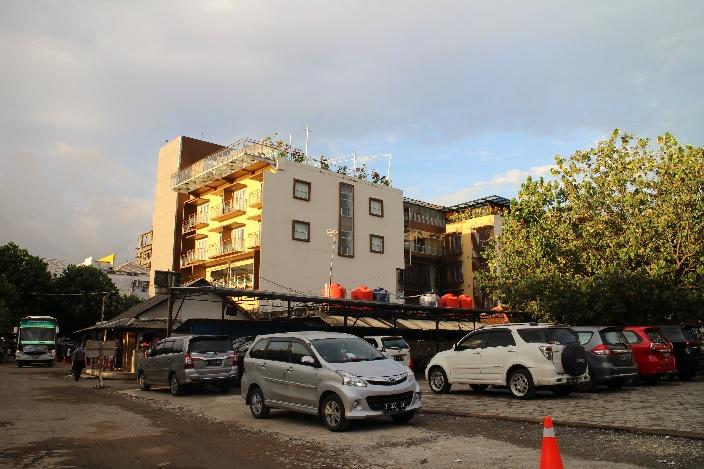 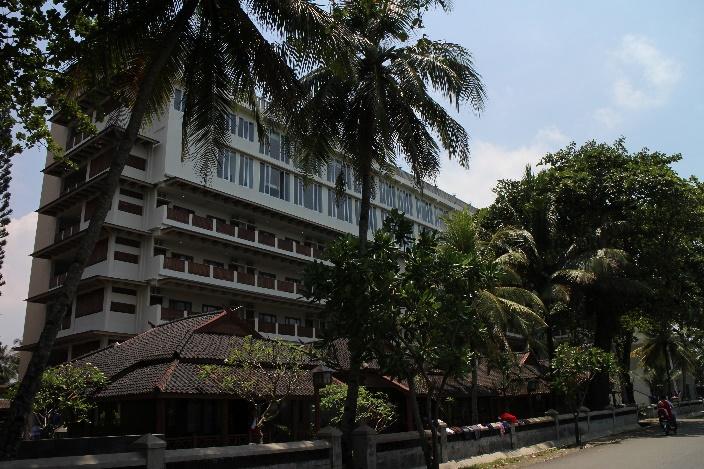 Newly built and renovated hotels are potential to be designated tsunami evacuation building, upon structural engineering verification (photo by Bisri, 2016)

From BPBD Pangandaran's own reflection, in spite of its recent establishment two years ago (due to the newly formed Regency), BPBD Pangandaran was very excited to participate in IOWave16 exercise. With little time for the preparation, they engaged in the table-top exercise (TTX) as well as the drill. This activity involved 80 people who came from various institutions and community leaders, and was focused on testing two different Early Warning System (EWS) points, i.e. Telkom Pangandaran EWS and Bojong Salawe EWS, in Parigi district. 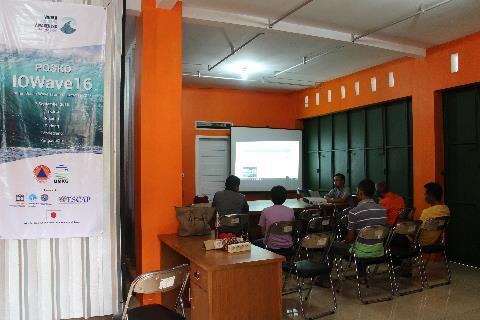 From BPBD Pangandaran’s perspective, it is a huge homework for them to instill a sense of awareness of the importance of prevention and particularly evacuation in the case of a catastrophic earthquake and tsunami. One of BPBD Pangandaran's staff acknowledged that, “since I am a tsunami survivor in the 2006 Pangandaran earthquake and tsunami, I am fully aware that disasters can strike at any time, and everyone should know how to save and evacuate themselves, so at least it can minimize casualties and losses” (local staff, interviewed in 17 September 2016). Therefore, BPBD Pangandaran hopes to continue taking part in IOWave that is being organized every two years, expecting that the Pangandaran residents will continue to be reminded of the importance of awareness with regard to tsunami hazards.

Although this year was BPBD Pangandaran’s first involvement in IOWave and the results were not seemingly very satisfactory from their perspective, the agency has an aspiration to continue participating in IOWave16 processes, in order to realize the vision to be agile and responsive against tsunamis. In addition, BPBD Pangandaran is also ready to partner with external organizations and regional disaster experts for building knowledge on disasters based on the Pangandaran’s past tsunami experience and for organizing various preparedness programs and activities, such as safe schools, drills or simulations.

To this end, clearly the IOWave16 shows that a more organized and coordinated efforts are needed to rebuild the disaster preparedness in Pangandaran. As a preceding element, it is also important for scholars and researchers to inform policy-makers with the long-term effect of Pangandaran’s recovery, as well as to assess the dynamic of coastal community resilience after ten years from the 2006 tsunami. Considering the fact that Pangandaran remains one of the most-visited tourism destinations in West Java Province, it is also important to start building communication with tourism-related businesses on their business-continuity plan and ensure business resilience against future risks.