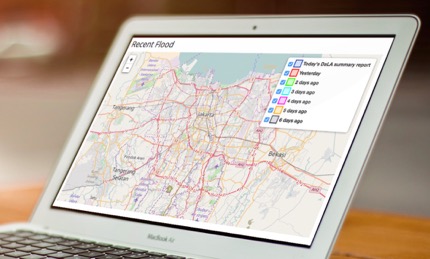 This Tool from Indonesia utilizes ICT for society's resilience and is associated with the keywords: Utilizing ICT for Development PlanningUtilizing GIS, RS, ST for DRREnabling Rapid Assessments and detailed PDNAEnhancing Future Investments

JakSAFE is a system designed to estimate the damage and loss (including infrastructure) due to flood events in Jakarta, based on information sourced from BPBD, external reports, social media and field observations.

The web-based software has been running since 2015 to estimate the damages and losses due to flood events in the Jakarta area. The main activities of this project are software development and exposure data collection.

Damage and loss calculation is a complex process that involving several aspects. Therefore, it needs at least exposure data, hazard data, and other assumptions as the input, for the calculation to begin. The exposure database was collected from local government, while the hazard data is gathered from command center of Badan Penanggulangan Bencana Daerah (BPBD) DKI Jakarta, in the form of flooded area with RW (Rukun Warga) Boundary as the unit analysis.

After the database has been completed, the exposure overlaid with hazard data and will generate information about assets impacted by the flood, which later will be calculated with several assumption and produce damage and loss value in Rupiahs (Indonesian currency).

Flood is one of the most common and frequent disasters in Indonesia. Among all areas in Indonesia, Jakarta is one of the regions which has a high risk of flooding. Losses caused by flooding in early February 2007 reached 5.16 trillion rupiahs, according to JakSAFE's website.